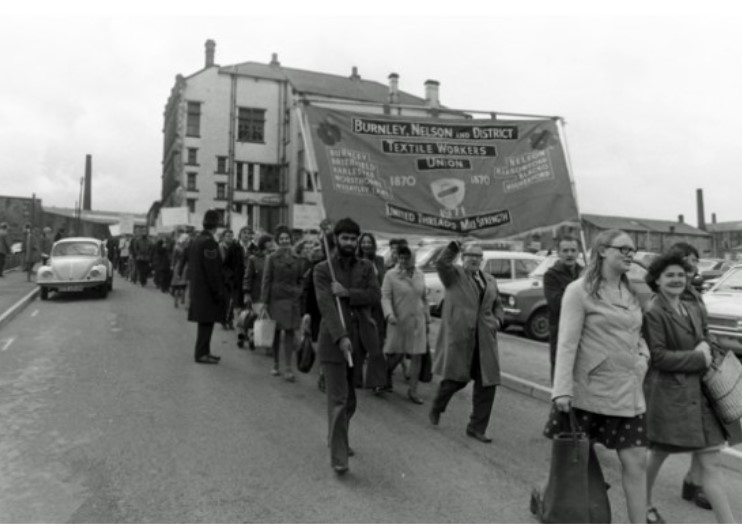 It’s 4am on a Saturday morning in the northern English town of Burnley, and music is blaring loudly from a house. Unable to sleep, a neighbouring Asian family ask the partygoers to turn down the music. An altercation erupts and a white man is injured with a knife. Around an hour later in the same part of town, an Asian taxi driver stops his car and is hit in the face with a hammer, shattering his cheekbone. This incident sparks three days of street violence, as Asian youth and white mobs take to the streets. A pub in a predominantly white neighbourhood is firebombed, cars are overturned, members of the local police constabulary are attacked, and several Asian shops and supermarkets are looted and destroyed.

Between April and July 2001, the northern ‘textile towns’ of Bradford, Burnley and Oldham became sites for major unrest, with clashes between white people and British South Asians (mainly of Bangladeshi and Pakistani heritage). During this period, it is estimated that around 1400 people took to the streets, with over 450 injured and 395 arrests made. A perception that Asian communities had privileged access when it came to housing, schooling, health and other services had engendered feelings of ‘white victimhood’. This perceived ‘unfairness’ was galvanised by far-right political campaigners the British National Party (BNP), who peddled racist and Islamophobic rhetoric.

There are many parallels here with the recent unfolding of Brexit, as Mike Makin-Waite explores in his carefully crafted monograph, On Burnley Road. In the 2016 EU Referendum two-thirds of Burnley residents voted to leave the European Union. It appears that the issues which form the backbone of this book – empire, de-industrialisation, racial inequality, policing, politics and class division – have not disappeared, but rather have been brought more sharply into focus through Brexit, a global pandemic that has deepened inequality, and the murder of George Floyd and the subsequent transnational Black Lives Matter protests.

On Burnley Road starts by setting out what Doreen Massey describes as the ‘power-geometries’ of place. Until 1947, the Indian sub-continent was a colony of the British Empire. As part of the ‘spoils of empire’, raw products such as cotton were uprooted from their colonial heartlands, processed and manufactured into garments in Northern English mill towns. In time, many South Asian migrants, as citizens of empire, would come to work in the ‘dark satanic mills’ of Lancashire and Yorkshire. (As the Black British Caribbean scholar Stuart Hall remarked in a BBC documentary, ‘We are here, because you were there’.)

Processes of globalization were to have profound effects upon places like Bradford, Burnley and Oldham, reaching far beyond immigration. Writing in October 2001 for the Institute of Race Relations, Arun Kundani commented that ‘the textile industry was the common thread binding the white and Asian working class into a single social fabric’. Tearing this tapestry apart would have an irrevocable fall-out, and Kundani remarks that the disturbances were ultimately ‘the violence of the violated’.

The closure of major industries and manufacturing under the Thatcherite regime in the 1980s ushered in a new moment of neoliberal economics. Communities that were built around the shipyard, pit or mill were increasingly deemed ‘economically unviable’. As unemployment soared, the Conservative Government encouraged private business start-ups, which saw a rise in Asian supermarkets, restaurants and small businesses. A minority of white residents – who had felt aggrieved and impotent to the wider structural transformations around them – began to believe that immigrants were ‘taking over the country’ (it is worth noting that the wards in which the uprisings occurred were in the lowest decimal on the multiple index of deprivation).

Following the events of 2001, the Blairite government commissioned The Cantle Report, an enquiry into the underlying factors behind the unrest. It pointed to segregation in schooling, leisure, living spaces and places of worship. White and British South Asian communities, it said, existed side-by-side but were living ‘parallel lives’ that rarely overlapped. In response to the report’s findings, Labour rolled out a national policy of ‘community cohesion’, where public institutions were tasked with actively fostering good community relations. Makin-Waite headed up this effort on behalf of Burnley Council, leading a small team in the unenviable task of reuniting a town divided not only by this most recent outburst of unrest, but also by longstanding deprivation, racial and class inequalities.

Twenty years on and the explosive events of June 2001 persist in the memory of those living in the town at the time. On Burnley Road showcases Makin-Waite’s time navigating and translating central government policy into meaningful initiatives in hard-pressed localities. While community cohesion is often seen as a politics of assimilation, which places the emphasis on minority ethnic groups to shed their heritage and integrate into the norms of white British society, Makin-Waite demonstrates that there remains room for progressive and thoughtful anti-racist interventions within it. He draws upon pioneering peace and reconciliation techniques used in Belfast to move beyond the reification of difference often associated with a community cohesion agenda.

Part of the difficult task for anti-racist activists is listening and understanding why people vote for far-right parties like the BNP in the first place. Many people felt Burnley had changed, others admitted to being ‘a bit racist,’ but many also showed regret, and reflected they might vote differently in the future. Makin-Waite lays bare the difficulties of threading together the rights and perspectives of different stakeholders, never shying away from the wreckage caused by racism, Islamophobia and class alienation. In particular, he illustrates how local concerns could be seized upon by the far-right and racialized in ways that sow violent conflict, splintering opportunities for working-class solidarity. It offers a unique insight into the town once dubbed ‘Britain’s race hate capital’.

Anoop Nayak is Professor in Social and Cultural Geography at Newcastle University, UK.  His research interests are in:  Race and Ethnic Studies; Youth Cultures and Social Class; Gender, Masculinities and Social Change.