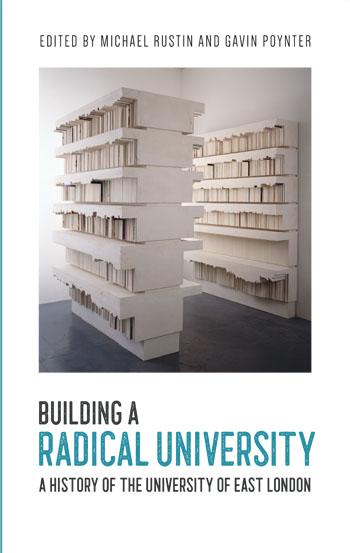 An extract from Building a Radical University

Building a Radical University is an inspirational account of what can be achieved in a climate of educational experiment, freedom and cooperation. This history of radical innovation at the University of East London was published on 4 September in print and as a free e-book. In this extract from her chapter ‘Bloody Snobs’, Tanya Frank describes UEL’s impact on her life and work.

I knew I wasn’t clever enough to get a fully-fledged degree. My teachers at McEntee High had known it too, telling me I wasn’t college material. But I started to toy with the idea that I could maybe get a diploma in higher education. It would take two years of study at the polytechnic. The words diploma and polytechnic were less formidable to my ears. Encouraged by my tutors at Waltham Forest, and by the confidence I’d gained from recent forays into feminist and cultural studies writing, I decided to give it a go.

But by the start of the spring term at Waltham Forest College, I was pregnant again. Gordon, Dale’s father, and I bickered more than we didn’t, as he berated me for applying to polytechnic, reminding me that I would never earn as much as him, and that women’s studies would turn me into a lesbian …

Mum agreed wholeheartedly with Gordon that I should stay home and look after the children. A short access course was one thing, but leaving the kids in order to study for a diploma, and heaven forbid getting a full-time career afterwards, would risk causing them irreparable harm. The vice-principal of North East London Polytechnic leaned closer to Mum’s sentiment than my own, suggesting I might consider postponing full-time study for a year to focus on my domestic responsibilities.

But I knew differently, intuitively, despite the loud noise to the contrary. I knew that I needed something under my belt, for not if, but rather when Gordon and I would go our separate ways, and I would have to become everything to the boys. I took driving lessons. Just in case. In case of an emergency, in case I needed to do a big shop at the weekend, and secretly in case I might dare to really take up the course …

In the autumn of 1989, I clunked through the gears and stalled at every stop on my way to the main site of the polytechnic in Barking, Dagenham, hoping I wouldn’t get pulled up. I dropped Dale at the on-site crèche, and took newborn Zach with me into the classroom. The polytechnic was modern and spread out. A double grey portakabin housed the student union and bar, and sat smack bang in the centre of campus. The place was more Chingford Hall than Oxbridge, and I felt immediately at home.

I chose classes in women’s studies, third world studies (later renamed development studies) and anthropology. In that first semester I sat at the back of the lecture theatre and breastfed Zach, learning from women’s studies professor Maggie Humm how that nameless feeling which had been sitting heavy in my stomach for years, that sense of displacement and subjugation, was not just peculiar to me but had been written about and interrogated even before I was born by Betty Friedan in The Feminine Mystique. The units for women in the third world helped me conceptualise what I had witnessed in Andhra Pradesh, and to understand the gender politics at work in the community of Bangladeshis close to where I had lived, where a rising trend of termination of female foetuses had hit the headlines and caused international alarm. Theories of class and race, ideas that had shaped my life without ever consciously crystallising became suddenly as clear as the view from my tower block window – the North Circular Road, and beyond it the illegal caravans squatting near the perfectly round reservoir.

The access course had kept our learning local. We studied at The Vestry in Old Walthamstow, which had once been a workhouse for the poor, the industrial revolution, the suffragists, the miners’ strike, and Britain’s role in the first world war. But now, as part of my lessons at the polytechnic, I was learning things on a macro scale, global concepts of neo-imperialism, second-wave feminist writing from both sides of the pond.

In the buzz and fervour of it all, I started to find my voice, to read critically, to pin myself on the map, to know where I stood politically. Although I was attending the polytechnic part time, two days a week rather than three, in my heart and mind, in my gut that now churned with excitement and novel ideas, I was more than part-time, more than full-time; I was a whole new me …

I had a tribe. There was strength in the students in my cohort: Meena, a young divorced mother of five; Barbara, a florist old enough to be my mother; Michelle, a burned-out Afro-Caribbean nurse who worked on an intensive baby care unit. These women buoyed me up, talking to me late into the night about postmodernism, poststructuralism, post-everything. I finally found the confidence to stay on beyond the two-year mark and the diploma, and study for my degree.

North East London Polytechnic became the University of East London. I loved that something about my East End working-class roots was still there in the title of the university, and I loved that I was attending a real university now. By the time I graduated, I had learnt to craft ceramics, paint … take photographs and make an audio-visual tape-slide project in my Women in Art unit, to examine the slave trade and the impact of colonialism in my Women in Third World Development, but it was the opportunity to tell my story in the women in autobiography unit that would reshape my story forever.

Tanya Frank holds a BA in Women’s Studies from the University of East London, and an MFA in Creative Writing from the University of California. Her work has featured in The New York Times and The Washington Post. She is currently working on her memoir, Zig Zag Boy: A Mother’s Reckoning with her Son’s Psychosis (Harper Collins UK 2021). She lives between Los Gatos, Califonia, and her native city of London, with her wife.