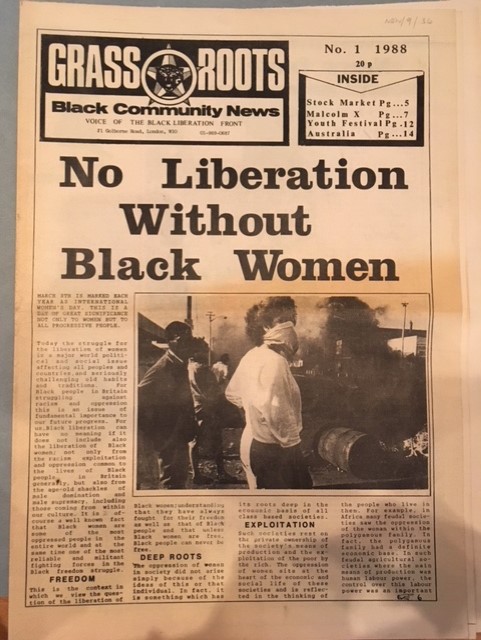 A.S. Francis, PhD candidate at the University of Chichester and coordinator of the Young Historian’s Project, on women’s experiences and contributions in Britain’s Black radical movement of the late 20th century.

This International Women’s Day, and more widely this Women’s History Month, provides an opportunity to centre the contributions of Black women to community organising and radical approaches to fighting for Black liberation. These contributions are still significantly underrepresented in historical discourse. The Black radical movement of the late 20th century has been the subject of various publications, documentaries and dramatisations in recent years, but the participation and leading role of women requires greater attention and expansion.

Last year’s Small Axe Anthology by Steve McQueen included an interpretation of the trial of the Mangrove Nine, in which nine London-based Black community activists faced trial at the Old Bailey on various trumped-up charges relating to inciting a riot against police. This trial is thought of as one of the pinnacle moments in Britain’s Black Power era, which lasted from the late 1960s up to the mid-1970s. While there were many other trials involving Black activists and the police in this period, the trial of the Mangrove Nine in 1970 represents an unusual success story for the Black defendants. As is the tendency with dramatic interpretations the wider political context of the trial, and the Black Power movement many of the defendants belonged to, was heavily watered down in McQueen’s Anthology. 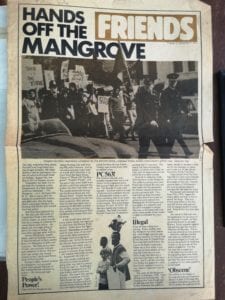 However, the performances of Letitia Wright as Black Panther Movement leader Althea Jones-Lecointe, and Rochenda Sandall as Black Eagles and Race Today member Barbara Beese, provided an avenue for audiences to analyse the particular positions of women in the movement. Their contributions to the cause were in many ways heightened and complicated due to their responsibilities as women and mothers, as well as Black radicals, and by their fight against male chauvinism in the wider struggle against white supremacist capitalism, imperialism and British racism.

Women were a minority in the early stages of Black Power organising in Britain (though notably, the Fasimbas, a South-East London Black youth organisation set up in 1968, had a majority female membership).[1] Women in Black organisations became more visible from 1970. By this year, the Black Panther Movement was led by a woman, Trinidadian-born Althea Jones-Lecointe, after the organisation’s founder, Obi Egbuna, was imprisoned for his political activities and banned from further organising. Althea soon steered the Panthers in a new direction, away from Egbuna’s vanguard approach and toward a more community-engaged organisation which recruited from the grassroots. The Panthers attracted a large number of teenagers due to its emphasis on the arts and Black history, and most of all Jones-Lecointe’s charismatic leadership. She developed a reputation for her intolerance of misogyny within the group and implemented a strict moral code for Panther members. She was also, according to Colin Prescod, the “only person in the movement who could tell Darcus Howe to shut up”.[2]

Other Black radical organisations also began to pay attention to the “woman question”. The Black Unity and Freedom Party (BUFP) was founded in 1970. It was heavily influenced by Marxist-Leninism and Maoism. The BUFP was the first organisation of its kind to frequently argue that the “role of women” in the movement was as equal participants to men. Within its first year, BUFP member Gerlin Bean launched the organisation’s Black Women’s Action Committee. Gerlin had arrived in London from Jamaica aged 19 in 1960, worked for some time as a nurse and then turned her energies to youth work and community activism. Gerlin had been inspired to set up the Black Women’s Action Committee after attending the 1970 National Women’s Liberation Conference at Oxford University as one of only two Black women present. The event proved to be a catalyst for the British women’s liberation movement. But during this conference, Gerlin was struck by the huge differences between the problems facing Black and white women, recalling that she “couldn’t really pick on the relevance of it as it pertained to Black women”.[3] Following this, she began sowing the seeds of what would become the Black women’s movement from within the Black radical network of the time.

Gerlin gravitated to the North London-based Black Liberation Front, a Pan-Africanist and socialist organisation set up in 1971. She ensured they also set up a women’s chapter, and a ‘Sister’s Column’ began to appear in the organisation’s Grassroots newsletter. As the mother of the Black women’s movement, she established Black women’s chapters and study groups within mixed gender organisations, and later co-founded autonomous women’s groups such as the Brixton Black Women’s Group in 1973, and the Organisation of Women of African and Asian Descent (OWAAD) in 1978.[4]  She was slightly older than most of her peers, and various women have credited her with facilitating their entry into Black radical organising. Gerlin’s comrade in the movement and lifelong friend, Zainab Abbas, stated that “she was a mentor to us all,” irrespective of gender.[5]

Both Gerlin Bean and Althea Jones-Lecointe were leading figures in the Black radical movement, and deserve to be at the centre of research projects, books and documentaries, as well as the countless other Black radical women who were present in Britain at the time. Alongside this, the best way to honour these women is to continue their work in encouraging positive change, and an end to racism, economic exploitation and oppression, imperialism and state violence in all forms – The Struggle Continues.

A.S. Francis is a PhD candidate at the University of Chichester and the coordinator of the Young Historian’s Project. Francis’s research concerns women’s experiences and contributions in Britain’s Black radical movement of the late 20th century.