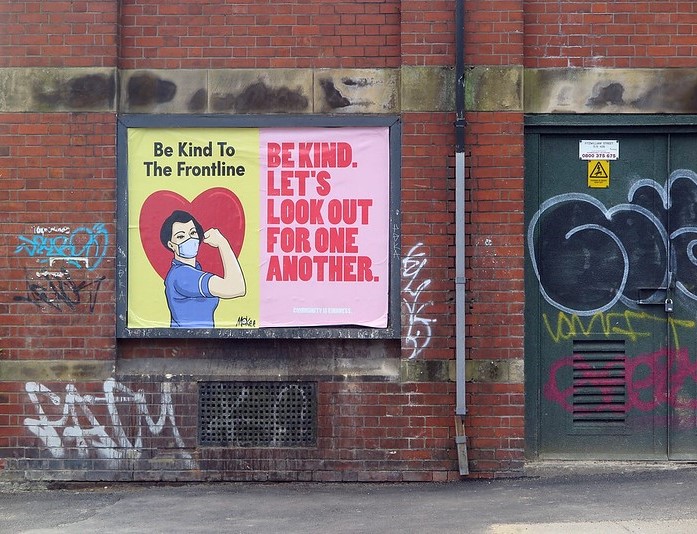 Deborah Grayson on the politics of neighbourliness in the Covid-19 pandemic.

In the run-up to the general election last year, my friend Sita Balani wrote a prescient blog about the politics of risk. She was writing about the widespread phenomenon of canvassing for the Labour Party, and in particular what it meant for those of us rooted particular kinds of queer, feminist and antiracist organising practices, with their emphasis on ‘safer spaces’, to engage in the fraught uncertainties of doorknocking. The Covid era has of course added a whole new kind of danger to knocking on strangers’ doors, but the central theme of her blog has become even more apparent – that societal risks cannot be addressed within tiny bubbles of the radical left, and that there is an urgent need, as she put it, to seek “mass social change, not pockets of safety”.

So, we have got busy again, and it seems like everyone I know is now bottom-lining a local mutual aid group. Conversations with friends, as we swap notes on WhatsApp etiquette and the best way to pick up prescriptions, have a similar election-time feel of a dispersed but powerfully collective experience. The key difference between now and then is where this organising is happening. While last winter we found ourselves travelling in Labour-branded woolly hats to marginal seats, the lockdown has forced us to engage in a kind of organising that is arguably even more out of our comfort zones, with our literal, geographical neighbours.

The focus on physical proximity, and the need for many of us to go local for the first time, is discomforting on a number of levels. For people who have rarely felt included in any clearly defined ‘community’, and who are well aware of how the concept is weaponised by the right, it is disconcerting to have to re-centre our relationships around basic material conditions like walking distance. Just who we are now apparently in community with can feel particularly arbitrary for transient groups and dispersed minorities, whose lives have till now been geared around maintaining relationships with people who cannot consistently be nearby. And there is something worryingly small-c conservative about fixating on forming relationships with people who happen to live on your street, especially when the worst of our curtain-twitching, Neighbourhood Watch-ful impulses are being actively encouraged by the state.

The fact that different political projects could emerge from this groundswell of organising is the source of new opportunities and new risks. These have a different and more mundane flavour to doorknocking, in part because the actions of mutual aid groups are not necessarily being understood as involving a politics (the anarchist roots of the concept of ‘mutual aid’ having been successfully obscured). Arriving on someone’s doorstep and asking them how they are planning to vote invites a possible confrontation precisely because it is unequivocally understood as a political act. Getting together with your neighbours to deliver shopping sits much more in the realm of Big Society-style ‘little platoons’ which both provides a meeting point for the different kinds of people who might participate, and runs the risk of avoiding crucial questions about responsibility and power.

My current research project, Policing the Political, has been exploring many of these questions within wider civil society, focusing on how small organisations experience a loss of voice and political agency by constructing oppositional activities as ‘political’ and therefore illegitimate. Given this, I have obviously been highly interested to see these same dynamics playing out within mutual aid groups. The process of silencing people by categorising certain actions as ‘political’ was particularly explicit in one WhatsApp group I’m in, when a woman who shared a petition to renationalise the NHS was shut down on the grounds that the group was “not the place for politics” – although it had been considered uncontroversial to use the platform to encourage people to #clapforcarers on Thursday nights.

More often, the different political positions at play are more coded. A friend tells me about a bust up in her local group over whether to share a poster advising people to think carefully before calling the police, which some members said with “outside the group’s remit”, though she diagnosed their objections as actually coming from not wanting to criticise the state. Politics can also be embedded in processes – I’ve heard of groups who won’t allow people to volunteer without a DBS check, or insisting people give their passport numbers and national insurance numbers to participate. Quite apart from concerns about who might have access to this data, these practices run counter to the whole principle of mutual aid by excluding large numbers of people who are likely to need ‘helping’ from being able to be a ‘helper’. 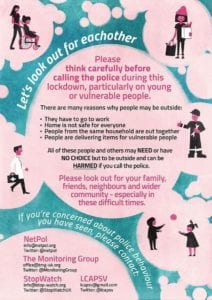 [Image description at the end]

And yet, this is where we find ourselves – often with no choice but to rely on those who happen to be close by, and very little leeway for other kinds of political action in the current moment. So how can we think about our role in this kind of organising, as people coming to these mutual aid groups with an analysis of how we have ended up here, and an understanding of the dangers of seeing this crisis in depoliticised terms? One thing we can bring to the table is an understanding that the public health crisis will be followed by a huge social and political crisis as we navigate unprecedented economic turmoil, and the full force of the measures required to reinstate capitalism after it has been demonstrated that it is not only deeply harmful to life, but also optional.

Perhaps one way to think about what we are doing is as a series of stages. Stage 1 we might call “basic neighbourliness” – at this point we are making connections and developing a sense of who we might be able to call on in an emergency, and reducing anxiety and helplessness by having a focus for taking action. Stage 2 is when we move on to “advanced neighbourliness”, where we take meaningful action to keep each other sane and well, supplement existing networks of support and try to prevent widespread destitution. Most groups I know of seem to be somewhere between stages 1 and 2, depending on the level of ‘neighbourliness’ that preexisted the crisis, and the intensity of current needs.

However, these stages need to be followed by another, stage 3, which could be called something like “radical neighbourliness”. This will involve engaging with the inequalities that led to certain groups disproportionately dying and becoming destitute, and building meaningful long-term solidarity across lines of power – and between different places – in order to resist oppressive state measures. To get here, we will need to take the opportunities that mutual aid groups provide for having new conversations about policing and borders and precarity and injustice, and to insist that ‘neighbourliness’ doesn’t stop at running errands but encompasses a much deeper process of collective transformation. This will require us to exercise the “forgotten revolutionary virtue of patience” – and to be willing to build and maintain relationships with people who may never conceive of this as ‘political’ activity. This is the risky, frustrating but necessary work that will challenge and expand our ‘pockets of safety’, and point towards new ways of living together.

[Image text reads: Let’s look out for each other. Please think carefully before calling the police during this lockdown, particularly on young or vulnerable people. There are many reasons why people may be outside, including those beyond their control:

They have to go to work. Home is not always a safe for everyone. People from the same household are out together. People are delivering items for vulnerable people.

All of these people, and others may NEED, or have NO CHOICE, but to be outside and can be HARMED if you call the police. Please look out for your family, friends, neighbours and wider community – especially in these difficult times. If you are concerned about police behaviour you have seen, please contact: NetPol – info@netpol.org – Twitter: @policemonitor / The Monitoring Group – office@tmg-uk.org – Twitter: @MonitoringGroup / StopWatch – info@stop-watch.org – Twitter: @StopWatchUK / LCAPSV – lcapsv@gmail.com – Twitter @lcapsv]