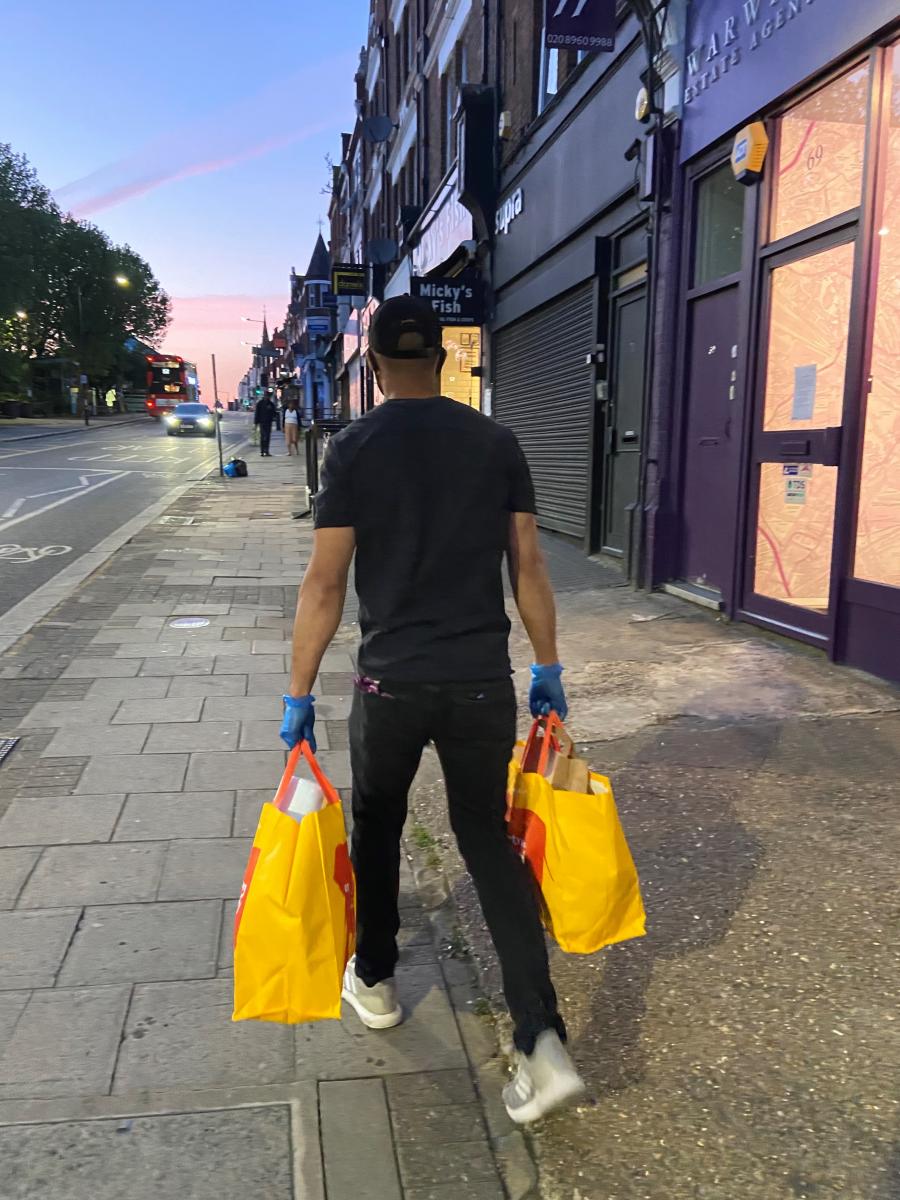 Soundings blog: Beyond radical neighbourliness: the case for micro-democracy

Image shows Riccardo delivering care packages on behalf of QPG Hub, one of the neighbourhood organisations funded by Queen’s Park Community Council as part of its Covid-19 response.

Susanna Rustin on the potential of neighbourhood networks.

Deborah Grayson wrote a blog a few weeks ago about the “new opportunities and new risks” created by the Covid-19 mutual aid groups. I found it interesting because I’ve been involved in a neighbourhood organising project for a decade. And during that time I’ve become curious about why more activists aren’t doing similar things.

The piece encouraged me to think that the mutual aid movement might prompt more people to pay attention to the potential of neighbourhood networks. But I also found Debs’ account of the “risks” useful because it sets out so clearly two grounds for leftwing people to object to localism.

One is a distrust of geography as a way of defining a community, because it can be seen to reinforce the very boundaries that anti-racist activists in particular want to resist. The second is a suspicion of activities such as helping people with shopping that feel more like charity (the dreaded Big Society) than politics. As Debs points out, many of those involved in helping people during the pandemic don’t regard this a challenge to the status quo. Such efforts could even prop it up, by papering over cracks in public services and muting demands for change.

But Debs sees value in “neighbourliness” and proposes that the foundation of social solidarity formed during the pandemic could be built on. Once a group reaches a stage where it is capable of taking meaningful action, she suggests, “radical neighbourliness” could be the next stage. This would entail a longer-term commitment and willingness to tackle injustice that go beyond a wish to be kind, as well as to work with others who do not conceive of this kind of activity in political terms. Such willingness to move beyond right-thinking “pockets of safety” is all the more important at a time when politics has, for many people, become a dirty word. If volunteering brings with it new understandings and alliances, why shouldn’t it lead to other forms of collective mobilisation over time?

But what of democracy? Does Debs’ reference to “the revolutionary virtue of patience” mean we have to wait for the next election, or some unspecified upheaval between now and then? Is the idea to gradually induct the mutual aiders into canvassing for Labour? I’m not knocking this. Building grassroots opposition to Boris Johnson’s government is important. But I want to suggest that local networks should consider two further stages of neighbourliness which are democratic and redistributive.

I’m sure some (maybe most) Covid-19 mutual aid groups are already democratic. But what I mean by democratic neighbourliness is where a structure is established to enable as many people in a given area as possible to have a say, and hold decision-makers to account. Tenants’ and residents’ associations could be seen as examples of this. So could campaign groups with elected committees, such as those set up to oppose estate demolitions or library closures, and the neighbourhood boards or councils convened by local authorities. The project I’ve been involved in for exactly a decade (since the first wave of coalition cuts) has its roots in a variant of the latter: an elected forum out of which grew a resident-led campaign to set up London’s first community (or parish) council.

I don’t want to bore anyone with too many details but basically people who live in our neighbourhood of 14,000 people – Queen’s Park, in north Westminster – have an extra tier of ultra-local government: 12 unpaid resident-councillors and two officers. The council is funded by a “precept” (an amount added to council tax). We are non-partisan, but there is nothing stopping political parties from putting up candidates.

In the six years since our first elections we have helped keep our local youth centre open, put on regular community events and funded numerous projects aimed at supporting vulnerable residents. But our capacity for what I am calling “redistributive neighbourliness” has never been clearer than during the pandemic. Like other areas, we have generous volunteers. But we also have a budget. And this has made our redistributive efforts during recent weeks much more effective, because we have been able to contribute money as well as time to local efforts (Queen’s Park is in the second most deprived decile of wards nationally; just 22% of residents are homeowners and 20% of homes are overcrowded).

Since Labour changed the law https://www.localgov.co.uk/White-Paper-primes-the-parish-pump/7866 in 2007, anyone in England can petition to set up a parish council. But apart from us, no one in London has (a recent campaign in Spitalfields was squashed by Tower Hamlets council). I’m sure there are many reasons for this. But among them, I think, are an entrenched disregard for local government in our over-centralised country and resistance from the main parties to anything that might shake things up.

I won’t pretend a community council is a panacea to all the ills of inequality and disenfranchisement. Arguably, it is just another example of what Grayson calls “pockets of safety” – with extra lining bought by extra taxes. Even if it were, I would value it. Our micro-democracy’s powers and impact are limited. But by helping to keep our youth centre open, and improving our local park – which has never seen heavier use than during the pandemic – I think we have built a bulwark against some of the most brutalising and antisocial effects of austerity.

In an ideal world, of course, we would not need to dig into local pockets to fund such important social infrastructure. The cuts that brought our campaign into being in the first place should never have happened. Youth work should be a statutory service. But that said, I think neighbourliness should be seen as more than a last resort.

I can’t vouch for what might happen in Islington or Lewisham were a community council to be set up. Like any other grouping, a community council could be taken over by sectional or selfish interests. But I can say that, as well as the tangible benefits of additional spending on the public realm locally, our micro-government provides an alternative route to engagement in civic space; and gives people democratic levers that are nearer at hand than the town hall (in our case nearly four miles away in the West End). If you believe that politics requires regeneration, and think power in England is remote and over-concentrated, an ultra-local tier could make a difference.

Susanna Rustin has been a community councillor in Queen’s Park since 2014 and works as a journalist at the Guardian.