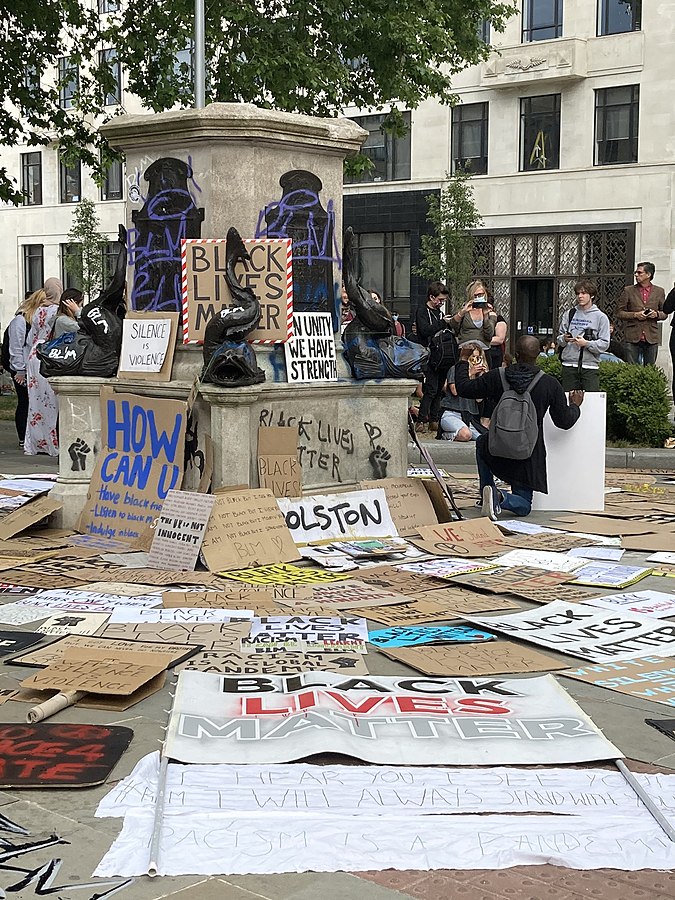 In the second piece in the Soundings Turning points blog series, Brenda Kirsch looks at a pioneering account of the Black presence in British history.

The dethroning and jettisoning – albeit temporary – of the Colston statue in Bristol was an exhilarating moment. Not just for the exquisite symbolic symmetry of the ‘drowning’ of a slave trader who had been responsible for so many deaths at sea in the Middle Passage. But because the action, and the emotions and thinking behind it, was also a moment when Black British history and presence came to the fore. British Black Lives Matter in tandem and solidarity with the US movement.

As a white person growing up in Hackney in the 1950s and ’60s, I knew far more about the Black American experience than I did about the lives of the Black British families living in the borough. At my primary school there were only a handful of Black children, all in younger year groups. I grew up to a soundtrack of American jazz ‘royalty’ (the Count, the Duke, the Earl, the Lady, the Queen), who were barely a generation away from US slavery itself, and I was told how they had developed their musicality in the Jim Crow era of segregation, lynchings and white supremacism. I was a student at the height of the US civil rights movement, and followed events there closely. Later I broadened my knowledge in campaigning against colonialism and the continuing fight against apartheid. I had read Frantz Fanon and James Baldwin. But I knew little of the lives of the first generation of Caribbean settlers in Britain, though I was very committed to the cause of anti-racism.

My own activism had begun aged fourteen in protests against the neo-Nazi Colin Jordan speaking in Ridley Road market in Dalston, then still very much a Jewish working-class as well as traditional East End market. His National Socialist (later ‘British’) Movement was active in attacks against Jews and ‘Keep Britain White’ sloganeering. And this was barely twenty years after the revelations of the Holocaust.

Although that protest action was organised by the Association of Jewish Ex-Servicemen, as a secular working-class Jew I was less interested in keeping my activism within the Jewish community. Indeed, it was the claustrophobia of a Jewish-centred upbringing that fired my enthusiasm for communism. My parents were employed as casualised low-paid workers in Jewish-owned tailoring sweatshops and we lived in a few rundown rooms owned by a Jewish landlord – negligent rather than a Rachman. So much for being looked after by your own for conferring any advantages. It didn’t take much to see that inequalities in class, wealth and ownership did more to determine our lives than going to synagogue three times a year.

I spent much of the 1970s and ’80s in ‘anti-racism’ work – basically among the white left and trade unionists. We campaigned against the National Front and then the British National Party – I wrote a pamphlet on the National Front and got sued by an arch right-winger I had named, a useful but costly education in the libel laws. We organised meetings and were then disappointed when no Black people attended (in the same way that ‘real’ working-class people never emerged on to a left terrain not defined by them). We attempted to combat the ‘false consciousness’ that sowed seeds of division among the working class.

As remembered by the late Trevor Carter – a British Trinidadian active in the Communist Party of Great Britain, Caribbean Labour Solidarity, the Notting Hill Carnival, the campaign to support the Mangrove Nine, and much more besides – the left was more interested in recruiting Black Britons into existing working-class struggles than addressing the immediate problems of the Black community.1 And while the CPGB was an avid supporter of anticolonial struggles, enabling exiles from the colonies to organise for their country’s independence, it was less enthusiastic about Black self-organisation. In this it shared the general reluctance of the trade union movement, which was at best ‘colour blind’ if not overtly racist when it came to defending the specific interests of Black workers.

With trade union non-action to support Black members facing racism at work, it seemed a breakthrough moment in 1977 when Arthur Scargill led the Yorkshire miners through the streets of London’s Dollis Hill in support of the mainly Asian women workers striking at Grunwick. But Black (or women’s) self-organisation in trade unions was still a cause too far until a decade later.

But 1981 was a defining moment. In January, thirteen young Black people died in a fire at a party in New Cross in South London. The tragedy was a touchstone in an area that had seen National Front action and police indifference to racist attacks. The police dismissed concerns that the fire was arson. In protest at this police inaction, and the subdued response to the tragedy (‘No message of sympathy from the Queen!’, noted one of the bereaved), in March around 20,000 Black people marched through London in the biggest Black-led movement then seen in London. And only a month later, there was an uprising in nearby Brixton, in response to police harassment of young Black people.

This was provoked by Lambeth police launching ‘Operation Swamp’, a huge stop-and-search operation using the notorious ‘sus’ laws – just weeks after Lambeth Council had published the report of its Working Party into Community/Police Relations in the borough, on which I represented the Trades Council – and which the police had boycotted. Based on evidence from local people, our findings were objective and sobering, and were a warning about the fragile circumstances in the borough. There was little surprise that the intensified heavy-handed policing provoked the Brixton riots/uprising. This in turn triggered a wave of similar protests by Black communities in other towns and cities – including many of Britain’s former slave-trading ports.

This stronger political presence and visibility for Britain’s Black population was the context in which Peter Fryer’s Staying Power was published, in 1984. I didn’t know a fraction of the history of Black people in Britain till I read it – and the story is as much about Britain as about its Black citizens.

With its striking opening sentence – ‘There were Africans in Britain before the English came here’ – the book gave a detailed account of the presence of Black people in Britain from the Roman period through to Elizabethan times, and up to the era of its publication. It covered the economic, mercantile, cultural and urban impact of the slave trade, and the lives of early Black residents – from ex-slaves to musicians; it discussed contributions to British life from outstanding Black individuals, the legal and political challenges to slavery, racism and empire, the rise of Black self-organisation and resistance, the development of ‘English’ racism as an ideology, and the shameful history of racist attacks on Black individuals and communities – and that’s all before getting to the Empire Windrush arriving in 1948 on p378.

Fryer, a white man from Hull who was a Communist Party member and a young reporter for the Daily Worker in 1948, had actually been at Tilbury to interview the Windrush arrivals from Jamaica. In 1956 he was sent by the Daily Worker to report from Budapest, but his defence of the Hungarian revolution and criticism of the Soviet reaction, and a subsequent book, led to his expulsion from the party. A jazz pianist, Fryer was originally interested in Black musicians in Britain, and from that developed a wider interest in recording the history of the Black presence.

With its detailed catalogue of facts, Fryer’s history is largely descriptive, until we get to the chapter ‘The rise of English racism’. This analytical account is a deep dive into the origins of racism, as an ideology distinct from race prejudice. He sets out how ‘all those ancient scraps of myth and prejudice’ emerged as justification for the rise of the slave trade ‘woven into a more or less coherent racist ideology: a mythology of race’. Outlasting the slave trade and slavery, the mythology of race was ‘to become the principal handmaiden to empire’ – Britain ruling the waves, with a god-given right to a moral superiority over lesser mortals, such was the ‘white man’s burden’.

Discussing the centrality of this chapter, Fryer explains: ‘the racism whose rise it outlines has been central to the experience of black people in Britain for the past 200 years. Long after the material conditions that originally gave rise to racist ideology had disappeared, these dead ideas went on gripping the minds of the living’.

But the main significance of the book is its contribution to deeper knowledge about the Black presence in Britain throughout the centuries, at a time when the Black British population was establishing itself as an important part of national political life.

Should a white person have written this Black people’s story? In his Introduction to the third edition of Fryer’s book, Paul Gilroy says that it demonstrates that ‘history is neither private not ethnic property, and can never be’.

For today’s readers, I would recommend David Olusoga’s Black and British as a starting point for an understanding of Black British history, based on the most recent archaeological and historical evidence and written with contemporary sensibilities in mind.2Staying Power has now been overtaken by history itself, and the book ends rather abruptly with the uprisings of 1981. But for its pioneering and meticulous historical recording, and for its insights into the story of Black people in Britain, this work should be widely recognised for the pathbreaker that it was.

Brenda Kirsch is a freelance editor who has worked widely for trade union, voluntary and publicly funded organisations. She has been a director of Lawrence and Wishart since the 1980s.