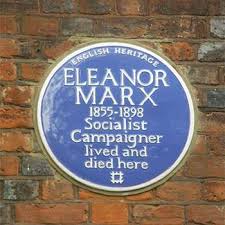 I first became aware of Eleanor Marx’s life in the early 1970s when I read Chushichi Tsuzuki’s biography, first published in 1967. I was fascinated by Eleanor’s activities, and by the fact that she had lived for the last two years of her life in a house only yards from where I was born in Sydenham, south-east London. Eleanor’s home, which she renamed The Den on taking out a long lease in December 1895, was a handsome mid-Victorian semi in Jews Walk. Eleanor was excited at the prospect of having a home of her own with enough space to live, work and entertain, and was especially happy that it was situated in a road with a name reflecting her father’s ancestry; she told her sister Laura, ‘I am Jewishly proud of my house in Jew’s Walk’. I was born in 1954 on the other side of Westwood Hill, on Sheenewood, a road made up of post-war houses and maisonettes built by Lewisham Council, to which my parents moved in 1950.

Membership of the Lewisham branch of the Communist Party of Great Britain from the mid 1970s brought me into contact with others – in particular John Attfield, who was secretary of the Party’s History Group – who were interested in the history of socialist activity in south-east London. We organised a History Workshop event, ran local history classes through adult education organisation the WEA and conducted interviews with veteran local socialists, one of whom, Rose Cox (nee Jones) had been born in Deptford in 1896 and had been babysat by Eleanor. Rose’s mother and father were active members of the local branch of the Social Democratic Federation, and were obviously among those ‘dear Lewishamers’ referred to affectionately by Eleanor in a letter to Karl Kautsky in November 1896. Rose’s father, James, was famous for his perambulations among the crowds in Lewisham market on a Saturday wearing a straw hat bearing the words ‘Communism – discussion invited’. This reminiscence, and many others, featured at a well-attended conference at Goldsmiths College in 1980 to celebrate the sixtieth anniversary of the Communist Party in south-east London. Sparkling contributions at this event from, among others, Robin Page Arnot and Charles Mann, the son of trade union and socialist pioneer Tom Mann, conveyed a sense of the early days of British socialism when the speakers, themselves then in their early twenties, worked alongside those ‘veterans’ who had known and admired Eleanor in the 1880s and 1890s.

Yvonne Kapp’s unsurpassed two-volume biography of Eleanor appeared in 1972 and 1976, deepening my interest in her life and work and acting as the genesis for the book we’ve just published. I remember reading Kapp’s second volume and thinking how good it would be to recover and translate Eleanor’s articles from Russian journal Russkoye bogatstvo from 1895. It has only taken forty-four years to achieve this!

The circumstances surrounding Eleanor’s tragic death continued to fascinate me and I harboured the hope that perhaps new evidence about that fateful day in March 1898 would be uncovered. This was in small part achieved thirty years later when, having retired from full-time service with the National Union of Public Employees and UNISON, I embarked on a biographical study of Robert Banner, a bookbinder and socialist who had been in contact with Karl Marx and Friedrich Engels in the late 1870s. I read in the Tsuzuki and Kapp biographies that, following Eleanor’s death, Banner had been instrumental in making public Eleanor’s tortured letters to Freddy Demuth and asking probing questions about Edward Aveling’s account of the suicide given at the inquest. Digging in the archives revealed that Banner, who had probably known Eleanor since 1882 when he arrived in London from Edinburgh, had indeed been the conduit for Eleanor’s letters to Freddy that appeared in Labour Leader and Die Neue Zeit, prompting calls for the case to be investigated. Banner was also the formal applicant in the appeal made to the Director of Public Prosecutions with new evidence garnered from Gertrude Gentry, the domestic servant at The Den, which raised serious questions about the accuracy of Aveling’s testimony at the inquest and the verdict of the coroner that Eleanor had committed suicide whilst in a state of temporary insanity.

Our research into the background of the Letters from England volume revealed another important piece of neglected evidence concerning Eleanor’s death, which Tony Chandler deals with in his account. Suffice to say that what came to light about Aveling’s crimes had been hinted at by Eduard Bernstein in 1898, but had surprisingly been ignored by all Eleanor’s biographers who were aware of the source from which this is taken. Readers can find out more about this in our article ‘“Tussy’s great delusion” – Eleanor Marx’s death revisited’ in Socialist History No 58, pp7-31 (2020).

As to the ‘letters’ themselves, once they had been meticulously translated from the Russian by Francis King, it was obvious to us as editors that they would require a good deal of contextualisation, which we tried to do through an extensive introduction and a preamble to each letter. It was also apparent that as the authors were providing a month-by-month account of and commentary on events in England during 1895, extensive explanatory notes were necessary for readers to understand much of the content.

Both Kapp and Rachel Holmes, Eleanor’s most recent biographer, attributed the Russkoye bogatstvo articles to her alone. This we consider an error, as it is made clear in the first letter that the contributions would be produced jointly by writers of both sexes. We are told: ‘Men and women look at things from different points of view. It may be that, in order to get the broadest possible perspective on human society, it would not go amiss to look at it from two different, although certainly not opposing, points of view – male and female.’ The letter then proceeds in subject matter and style characteristic of Aveling to explain how this approach ‘brings to mind what in physics is known as stereoscope vision’.

It is soon clear who has the strongest lens in the composition of the letters, with Aveling predominating in matters educational, economic and political, the themes most frequently discussed. His strident tone and penchant for point-scoring are all too evident, in contrast to Eleanor’s more nuanced but no less committed journalism. One senses that, as in so much of their joint work between 1884 and 1898, Aveling is the strongest voice, with Eleanor deferring to the man she admired for what she believed to be his superior education and intellect.

This is particularly regrettable in relation to the collection of Letters from England because Eleanor’s thoughts and reflections, where offered, are distinctive and invaluable. We get glimpses of them when Eleanor offers a critique of Oscar Wilde’s creed of ‘art for art’s sake’, which she says is a denial of the basic truth that art exists for life and living people; elsewhere, Eleanor discusses the ‘New Woman’ novelists, whose work she welcomes, but she cautions readers against conceiving of the ‘woman question [as] separate from the questions of all humanity’.

On this aspect of Eleanor’s and Edward’s working relationship, we can do no better than to turn to Kapp’s verdict towards the end of her first volume, which is worth quoting in full:

Every line that Eleanor penned, whether happy or unhappy private letters or for the public – as in every recorded word she spoke – is eager, warm, alive and rings true as a bell. Although his excessive facility enabled Aveling to pour forth lectures, journalism, pamphlets, plays, reviews, reports and a multitude of ephemera that have come down to us, his voice is not merely without character: it is muted, dead. Nothing rings through his words. Nothing at all… Veiled in facetiousness or dry didacticism, his voice is inexpressive as Eleanor’s is revealing of personality.

Notwithstanding this verdict, there is much in Letters from England that will fascinate those interested in the history of late Victorian socialism, and the relationship of the socialist movement to established political institutions and other aspects of English culture at the fin de siècle.