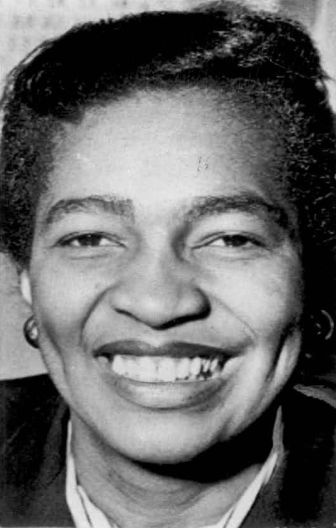 The art of resistance

Books Editor Jumanah Younis on the legacy of Claudia Jones

Last year, for the first time since 1966, Notting Hill Carnival was cancelled. With restrictions to prevent the spread of coronavirus now part of our everyday lives, it is hard to imagine that a million people used to pack into the streets of west London every August bank holiday. Covid-19 has hit black communities in Britain especially hard, with a disproportionate number of deaths among Black British African and Caribbean people. As the pandemic continues to lay bare the impact of racism on everything from public health to policing, what strategies for resistance might we learn from the life of Claudia Jones, the founder of carnival in Britain?

Marika Sherwood’s biography Claudia Jones: A Life in Exile first caught my eye because of the image on the cover. It shows Claudia hard at work on a newspaper, likely the West Indian Gazette (WIG), which she ran from 1958 until her death. A similar photograph of Claudia working, this time sitting at her typewriter, was used to publicise a Black Lives Matter UK noise protest earlier in the pandemic. The flyer called for people to protest by blasting the Jimmy Cliff song ‘The Harder They Come’ from their doorsteps, to draw attention to the government’s failure to protect black communities from the virus. A speech bubble coming from Claudia’s mouth read: ‘It’s time to make some noise for BLACK LIVES!’ 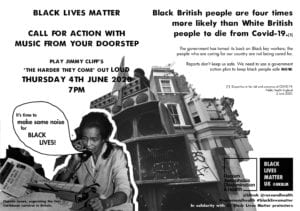 Claudia Jones was well aware of the power of music, art and culture to galvanise people and heal communities. Modern day Notting Hill Carnival is the descendent of the Caribbean carnivals that she organised as early as 1958, a year that saw racist violence unleashed on the black community during riots in West London. In the chapter on carnival, Colin Prescod explains how Claudia used her connections to ‘musicians, actors, singers, dancers and choreographers’ (p. 151) to make her winter carnivals a success, even hiring palm trees from Kew Gardens. That Claudia put on an event to celebrate the beauty and vibrancy of Caribbean culture against the backdrop of racist unrest speaks volumes about her approach to political organising.

Claudia was exiled to London at a time when many Caribbean, African and Asian people in Britain had themselves recently arrived. As the grandchild of one of those new arrivals, it’s hard for me to imagine what it felt like to be among the first to land in a hostile, white Britain. With discrimination rife in housing and employment, the focus for many was solely on survival. When racist violence surged in the late 1950s, there were no organisations through which black and brown peoples could organise for justice or self-protection.

Drawing on her rich activist experience, Claudia created institutions which immigrants from Britain’s former colonies could use to self-organise. She established solidarity as a key principle and strategy of the anti-racist movement through groups like the Committee of Afro-Asian-Caribbean Organisations (CAACO), which led the fight against the racist Immigration Act of 1962. Meanwhile, she served on the Central Executive Committee of the Inter-Racial Friendship Coordinating Council (IRFCC), which lobbied, among other things, for the government to outlaw incitement to racial violence, a key demand in light of the rising tide of white supremacist violence.

Claudia’s activism was not only limited to a national scope either. In 1962, the CAACO called a march from Ladbroke Grove in Notting Hill to the US Embassy in solidarity with the civil rights March on Washington for Jobs and Freedom. Claudia and a delegation of eight other CAACO representatives handed in a letter to the US embassy prior to the march demanding ‘“immediate steps to uproot the scourge of racialism”’ (p. 101). CAACO went on to campaign for the release of political prisoners in then British Guiana (Guyana) and apartheid South Africa.

By the time of her death in 1964, Claudia left behind an internationalist anti-racist movement in Britain led by and for formerly colonised peoples. That Claudia’s achievements in the eight years she was in the UK can fill a book speaks to her effectiveness as an organiser, her tireless commitment to activism, and, by all accounts, her charming personality. And yet, for many years after her death this biography was the only book that existed to tell the story of her life and work. Like many other black women activists, her huge contribution to community building and anti-racist organising was, for many years, close to forgotten.

The Black Lives Matter movement in the US and the UK has given renewed momentum to organising around racial injustice. For those of us who want to be a part of that change, Claudia Jones’ life can teach us what meaningful solidarity looks like, particularly across oppressed communities. The legacy she bequeaths us is one of pluralism: from carnivals to community newspapers, committees and coalitions, we are going to need to fight on many fronts.

As the new Books Editor at Lawrence Wishart, I want to use our commissioning to spotlight how women like Claudia Jones were central to black and brown communities surviving and flourishing in Britain. Alongside Claudia, there are many other black women activists whose work is too often overlooked, from Amy Ashwood Garvey to Olive Morris and Altheia Jones Le-Cointe. I strongly believe that the life and work of these radical women can serve as a blueprint for contemporary activists, if we choose to use it.