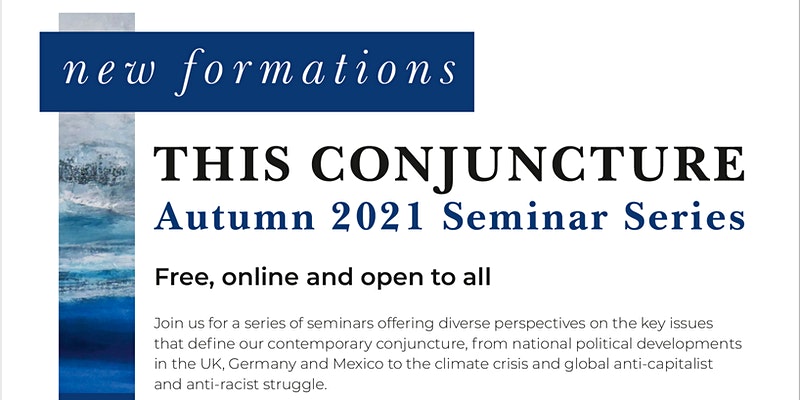 This Conjuncture: The Exhaustion of Merkelism

This is the first of a series of online seminars hosted by the journal New Formations (current editor: Jeremy Gilbert) in Autumn 2021, organised by Rebecca Bramall and Jeremy Gilbert. The series marks the publication of the journal’s series of issues published under the title This Conjuncture and dedicated to the memory of Stuart Hall.

Angela Merkel stands down as German Chancellor this autumn after 16 years in the role, but will Merkelism – the mode of crisis management that has dominated since the mid-2000s – continue to inform German politics? Fresh from the polls, join Moritz Ege and Alexander Gallas to discuss the legacies of Merkelism, Germany’s colonial entanglements, and the nation’s cultural-political future.

Moritz Ege is Professor of Cultural Studies and Popular Cultures at the University of Zurich. Moritz is the co-editor of two forthcoming edited collections: Against the Elites! The Cultural Politics of Anti-Elitism (with Johannes Springer) and Urban Ethics (with Johannes Moser).

Alexander Gallas is Assistant Professor in the Department of Political Science, University of Kassel, and one of the editors of the Global Labour Journal. He is the author of The Thatcherite Offensive: A Neo-Poulantzasian Analysis (2015). Moritz and Alexander are the co-authors of ‘The exhaustion of Merkelism: a conjunctural analysis’, published as part of This Conjuncture.